Message boards are great for people-watching.  Sometimes you might learn something here and there about gaming, but more typically, you learn about people's biases and the bad experiences that have made them bitter and divisive.  Take these nuggets paraphrased from a recent thread, criticizing the rules-light approach in various older game systems:


These types of complainants typically want a comprehensive rules set to which they can appeal as a higher authority, somehow saving them from those know-it-all, arbitrary DMs and bossy players.  Let's leave alone whether the medicine (lots and lots of rules) actually cures the submitted problem (bossy people at the table).  There's no need to impugn an entire style of game just because some message-board malcontents can't handle bossy people.

So what's really going on in these situations?  Smarter folks* than me have loosely grouped people according to how they handle interpersonal conflicts, and given them tags like competitors, collaborators, cooperators, avoiders, and accommodators.  Check out this stylish graphic that charts the various positions: 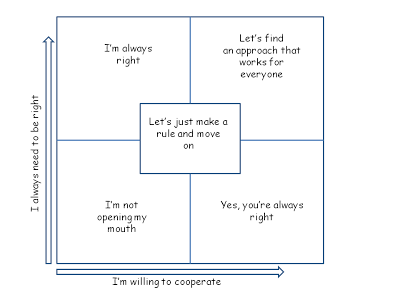 When you have one those know-it-alls at the table, who speaks with the Voice of Absolute Authority, they're acting like those folks in the upper left.  I don’t want that person either as my DM or one of my players, assuming they don't have the maturity to reign it in.  They're not a good fit for my gaming, regardless of system.

A long time ago, I wrote about my approach to making rulings when playing a rules-lite game:  Say Yes,Skill Checks in a Rules-Lite System.  Looking back on that post, it's clear my approach to creating a ruling is either cooperative or collaborative (the center square or the upper right).  I present a ruling to the players for agreement, there's usually some negotiation on how they can improve their chances, and then we ask for a dice roll, if applicable, and move on.  Rulings in the older games are just as fast (and just as collaborative) as assigning Difficulty Class (DC) in a modern game and opening the discussion up to discuss how various modifiers might affect the situation.  But no game system is going to solve for basic social problems at the table.


*The main one I've seen and used is the Thomas-Kilman conflict mode instrument, a set of questions used to identify and graph your default style