My Name is Beedo, You Killed My Dragon, Prepare to Die


I feel like the Rancor-handler in that Star Wars movie, watching his man-eating pet get crushed under the door, or the guys in the Conan movie that get all bent out of shape because Conan hacked the head off their giant pet snake.  You read the monster books carefully, looking for that special critter you just need to have, "I choose you, White Dragon", and then you make it a special home in the dungeon, plenty of food, water, you arrange for all the necessary comforts - like a giant pile of soft coins for nesting - and then *they* come along, and wreck it all.  Adventurers.

It's the day after the carnage; now the coffee tastes too bitter, the sunlight is weak, and I have this hollow feeling that used to be filled with joy knowing a monstrous white dragon was lurking in the dungeon ready to spring a TPK at any moment.  Now it's dead.  Sure, there will be other monsters, other boss fights.   There's more fish in the sea.  I get it.  The monster books are full of hideous travesties to challenge even the doughtiest adventurers.  I even told myself I wouldn't cry.  It's just hard to say goodbye, White Dragon.

So what did *they* do, to bring me to this low point?  I'm glad you asked.

Things started out well enough last game - the party was exploring some new areas in the southeast of the current dungeon, they stumbled on some rooms filled with Black City Radium (a glowing green poisonous rock), they fought a group of green, glowing, radiation zombies, and got exposed to a heavy dose of the green stuff - in fact, over half the group is going to start suffering from a wasting disease that will be fatal in like 1-6 months, losing charisma and the ability to heal, along the way.

The Patriarch of Constantinople, in far away Byzantium, has been at war with Himerius, the High Hermite of Constantinople, a known arcane dabbler and summoner, such that the Patriarch sent a higher level witch hunter (Andronicus Priscian) with a party of hand-picked clerics and a troop of Byzantine spearmen to track the party's Russian elves and magic users, who were all known associates and disciples of Himerius… these trackers followed them to Thule, and have been closing in on the party for a while, and finally accosted them deep in the dungeon.  Last night.  Then the party killed them.  (I should have called it a night then).

The players decided it was time to mess with the Ice Cave itself - besides, most of them were infected with radiation sickness, anyway, and that made them feel like taking risks.  The Ice Cave is down a long, 20' wide tunnel,  growing progressively colder and blocked with giant icicles and stalactites along the way.  Beyond these barriers is a misty cave with walls of solid ice, and an unimaginable pile of coins.  One of the recent items the party had recovered was a "wand of telekinesis" and they hoped one of the magic users (Dominicus) could weave his way through the obstacles, get close to the cave, and use the TK wand to surreptitiously lift a chunk of treasure out of the cave without breaking the giant icicles blocking the way.

It was a good plan, except that that they had a dozen characters tromping along with armor in their group, along with an over-sized robot that rolls forward on noisy treads which grind against the stone floor.  In other words, they're not exactly quiet.  The inhabitant of the ice cave, an adult white dragon, was awake.  The rest of the party stood a good 50' behind the barriers of ice, unable to see Dominicus, but they did see a horrible blast of cold spray plume out of the area.  Dominicus was flash frozen, brought to -40 hit points or so instantly.  The robot was sent to smash through the icicles and pillars of ice and engage the dragon, while most of the fighters and other characters ditched into a side passage, to be out of the line of effect of any more ice blasts.  A few (foolhardy) range-attack characters stayed in the main hall, waiting for a chance to shoot into the cave once the robot had cleared the way. 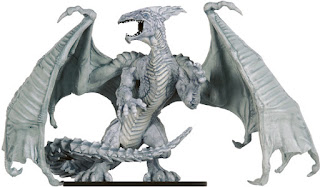 A dragon fighting a big robot is pretty cool.  I queued up Godzilla sound effects, and had the Godzilla theme music playing in the background.  90% of our fights are the quick and abstract variety, but for something like this, we'll put out the vinyl battle mat and get out the minis - using the "elder white dragon" miniature (pictured) was perhaps too dramatic, but the kiddo wanted it.

The dragon and robot smashed their way through the ice, and the dragon started tearing the robot apart with claw and tooth, while the robot punched it a couple of times.  It had the makings of a drawn-out heavyweight prize fight.  And then the players did something totally unexpected… they charged.

The dwarf and two of the fighters rolled high initiative, and sprinted out from around the corner, taking up positions on either side of the robot and laying into the dragon with axes and spears.  In the LOTFP rules, a charge does double damage, and the players got it down into a manageable hit point range with a few fortuitous strikes.  Once it started using its last two breath attacks, it was far enough down that the breaths were no longer instantly fatal to everyone.  The robot was frozen and destroyed, two of the fighters (Agnar and Visin) were dropped to zero hit points, the dwarf is made of hit points and managed to weather a breath attack, Tribunas the magic user made a saving throw and dropped unconscious (but not dead) from half damage, but poor Brick the Halfling was in the line of fire down the hallway, and took a blast directly.  He died.

Then the next wave of characters charged, including the two female Norse clerics (queue Wagner's Ride of the Valkyries) and Mustafa.  Again, the dragon rolled a 1 for initiative and took a round of beats, dying when Mustafa landed a killing blow.  I was… stunned.

I have to give some props to the players, the idea to hide around the corner and charge out at a surprising moment was inspired.

I may need to go back to DM school, to refresh on how to play dragons well as opponents… on a serious note, I do have some observations on the fight I'll put together later this week, a regular post-mortem.  Good job fellas, they took down a dragon, losing their uber-Robot and a pair of characters.  The clerics had enough healing after the fight to save the three characters that were between zero and -2 hit points (-3 hit points and lower is irrevocably dead in the game).  We had to end there as we were already an hour past our targeted end time.

That was Black City Game 21, below is the new and updated "dead list".  Hopefully the players can figure out a way to get a half dozen or more Cure Disease spells before too much game time passes, or a lot of folks will get added to the list in the near future when the radiation sickness catches up to them.

A few guys left when they failed morale checks in between adventures: