Catching Up With LOTFP - Review of Forgive Us

I'm traveling this week, and my 6 hour flight to the west coast gave me a chance to catch up on some PDFs I've been meaning to read.  Readers here know my latest campaign is focused on adventure gaming and whimsy, and I've been missing the horror!  Today and tomorrow I'll post brief reviews of Forgive Us and Scenic Dunnsmouth, two recent LOTFP releases, and reconnect with the darker side of gaming.

Review of Forgive Us 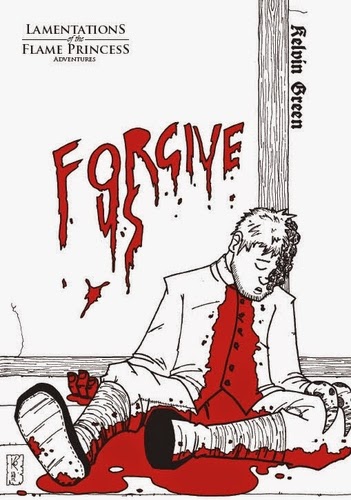 Forgive Us, by Kelvin Green, features two short adventures and vignette.  It's stark black and white, and the blood stained cover let's you know immediately - there's a bit of nasty business ahead.

The main adventure, "Forgive Us", involves a thieves' guild that robbed a nasty cult; they returned an artifact back to their hideout, opened it up, and let out the badness.  The referee needs to provide an appropriate motivation for his or her players to get involved - quite possibly someone unrelated needs them to investigate the guild.  Supplying your own hook is easy; the idea is that as the players break into the seemingly abandoned buildings that acted as fronts to the guild, clues and tension mounts as the players realize something has gone horribly wrong to the members.

Kelvin unapologetically calls out his cinematic influences, such as John Carpenter's The Thing or James Cameron's Aliens, and the referee would do well to keep those in mind.  Good horror stories build to that moment where the veil is torn and the nature of the horror is revealed; this adventure draws the player characters to that moment and unleashes horror and terror on them in a classic moment stressing greed versus survival.

The second adventure, "In Heaven Everything is Fine", presents a tragic village that calls to mind Lovecraft's "The Colour Out of Space" and a Twilight Zone episode ("It's a Good Life").  The final adventure ("Death and Taxes") is really just a vignette, involving a trio of cultists and the funeral of an old friend.  How far will the players go to dig up the truth?

All three of the adventures are atmospheric and capture a Call of Cthulhu vibe while letting you use the D&D friendly mechanics of Lamentations of the Flame Princess.  Kelvin's writing style is amicable with a touch of humor, and they're easy to read.  "Forgive Us" can quickly spiral out of control, and the referee should have a good handle on how much Cure Disease is available; I can see a harried group of player characters waking a powerful NPC cleric in the middle of the night for a cure, and then hoping to escape to the countryside before the whole town gets corrupted and overrun.  If there's a town or city you don't like, well, you can shake it up with this adventure.

I enjoyed these, and they'd make a fine addition to your horror themed D&D game.