A First Look at the Scoreboard

Here's a first look at Taenarum's "Scoreboard" (image below).  There are a few adventurer parties scattered between levels 1-3 that I need to add as well - they're either listed on wandering monster tables or buried in a room key.  A couple of long time bloggers helped me out with some parties from their home campaigns yesterday on G+ - thanks fellas!

I'm convinced more than ever that keeping a scoreboard for progress in Taenarum is going to be amazing.  It creates instant rivalries with the other groups on the board.  It provides an immediate sense of accomplishment for the players as their haul of loot moves them up the board.  It gives me a reason to have people in far off places like Sparta, Mycenae, or Corinth know about any given adventuring company.  It gives the game a funny, ironic, self-referential twist.  And it's going to give me a ton of material for rumors and foreshadowing.

For instance, the group is asking about the third dungeon level back in town.  Whatever bland rumor I had previously can be immediately dressed up.  "Oh yeah, there was this guy a while back - Higgins.  His guys learned that the ghoul king knew the whereabouts of the Bident of Hades, and that his court was somewhere in the northwest quadrant.  Of course, they never came back..."

I also like to put evidence of previous explorers in the dungeon.  I think it hearkens back to my love of Journey to the Center of the Earth, where the characters are following in the footsteps of a legendary explorer, Arne Saknussemm, and they keep finding his runic "A.S." carved along their downward path.  I'll use a ready list of past explorers like the ones on the scoreboard to embellish such details.  I'm keeping notes on the side about at least one notable member of each party for it.

I've seen dungeon concepts where the dungeon has been sealed, and the party represents the first humans to visit it in a long time.  There is a place for that approach, no doubt, but consider the opposite: the dungeon is vast, unknowable, and eternal; generations of explorers have tried to plum its murky depths.  Very few retire to old age; it's always the last mission that spells doom.  Adventurers come and go, but the monsters, traps, tricks, and lure of easy wealth endures.

Anyway, here's a first look at The Scoreboard - it's a work in progress.  It's not too late to suggest your own entry, either in the comments or on the G+ thread. 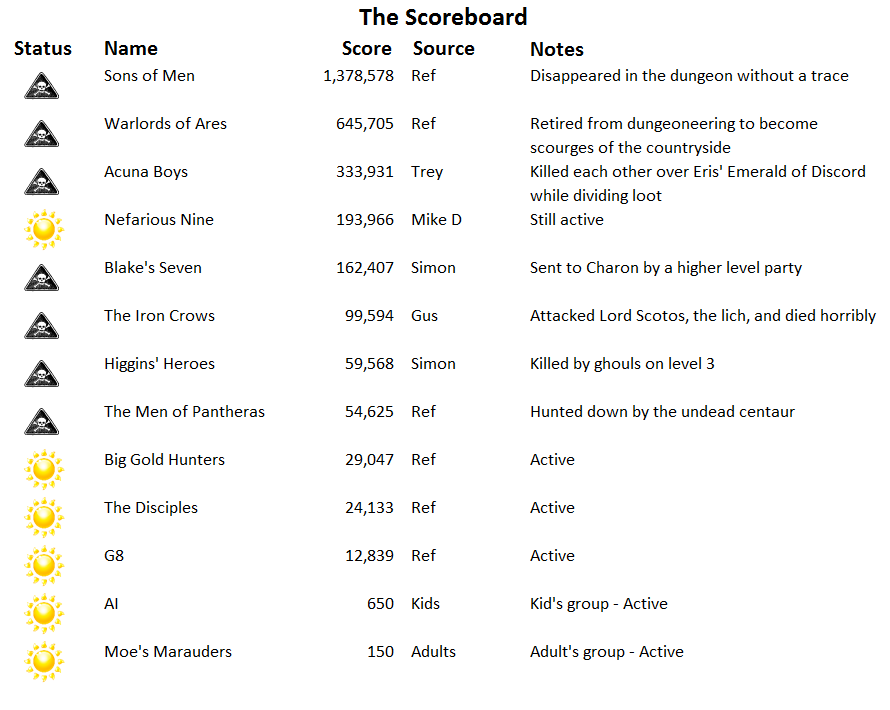