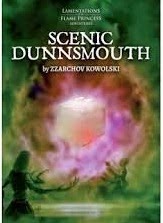 Scenic Dunnsmouth is a recent game book published by Lamentations of the Flame Princess, written by Zzarchov Kowoslki.  I had the chance to read it on my flight west.  It's a curious offering.  The centerpiece of any adventures in the book is the backwater village of Dunnsmouth.  The book provides the referee tools to create the titular village of Dunnsmouth before play.   Through a combination of tossing dice and using a deck of playing cards, the referee creates the map, selects the inhabitants, and determines many of their dark secrets.  Dunnsmouth will be unique to each campaign (and potentially let you use the material multiple times).

As the title alludes, the village is a blatant homage to Dunwich and Innsmouth, two infamous locales in HP Lovecraft's New England (albeit with nary a tentacle in sight).  There's the opportunity for folks to have a more fantastic version of the 'Dunnsmouth Look' for instance, and the old families of Dunnsmouth with their dark secrets are well described; the moral decay adds a gothic atmosphere to the proceedings.  There's even an homage to one of my favorite Magic cards from back in the day, Uncle Istvan.

However, I tend to think this style of village adventure would be very challenging to run with the assumptions normally brought to a D&D game.  It's not like ordinary villagers are going to accept a heavily-armed party of 6-10 adventurers to go knocking door to door in full panoply, and still engage in regular conversation.  Yet the referee  needs to provide a plausible plot hook for the players to sojourn to remote Dunnsmouth and talk to everyone.   Ferreting out the secrets of Dunnsmouth represents social challenges, investigation, and plenty of roleplaying - the opportunities for dungeon crawling are thin on the ground.  Some of the suggested hooks include going there as tax collectors (no kidding), or seeking a magical artifact (getting warmer).  There are plenty of mysteries that weave their way through the village that would only manifest through careful interviews.

Scenic Dunnsmouth reminded me quite a bit of the books from Chaosium's Lovecraft Country line.  The little character sketch portraits were a fine touch.  That's where I’d leave the review; if you like the investigative and social aspects of Call of Cthulhu style gaming (without the sanity loss), more talking and less sword fighting, sending your adventurers to Dunnsmouth to snoop around, flip over rocks and check under the carpets, is right in line with those expectations.  I enjoy Cthulhu investigative games quite a bit and look forward to giving this a play when we get back to some horror gaming.