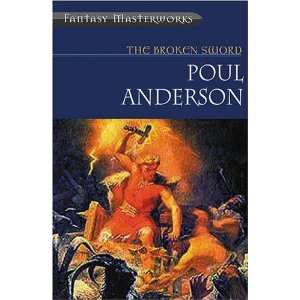 I had finished Poul Anderson's The Broken Sword as part of my Appendix N reading a few weeks ago, but hadn' t gotten the chance to circle back and do a review.  Pondering The Ring yesterday made me remember how many common elements the stories share, since they draw inspiration from the same myths.

Like my other 'literary' reviews, I'll only provide some general impressions of the work, then dive into what elements I found inspirational for gaming - why it's part of the Dungeon Master's Guide reading list in the first place.

The Broken Sword takes place in Norse England, the Danelaw, during the Viking Age.  It tells the story of the doomed hero Skafloc and his villainous "brother", Valgard.  Skafloc is abducted by the elves as an infant and raised in the mythic world amongst magic.  Valgard is a changeling, son of a troll and an elf, substituted for the infant Skafloc and raised in his place.  The story details the rise to prominence of the two brothers in their respective spheres, Skafloc becoming a hero to the elves and Valgard becoming a murderous leader for the trolls.

The story is epic in scope.  Much of the major action revolves around a war between the elves and the trolls, but the story includes gods, giants, monsters, magic, quests for a magic sword, fate, destiny, and plenty of blood, gore and violence - much more so than the other book I read of Poul Anderson, Three Hearts and Three Lions.  There are many common themes with The Ring cyle of operas, such as the incestuous love between a brother and sister (who tragically don't know they're related), the re-forging of a broken magic sword, and the certainty of fate.

The Broken Sword is an easy read, and would be good general inspiration for a Viking-era game or one with Norse themes.  Here are some more specific elements I liked:

The Sword of Wrath
I don't believe the broken sword is named in the novel, but it's the sword Gram (or Nothung, from The Ring) -  a gift of the gods that is forged anew through the efforts of the hero.  In The Broken Sword, it is cursed to always kill when it's been drawn from it's sheath, and fated to bring doom to its wielder.  Along the way, it lends great strength, cuts through anything, and turns Skafloc into an engine of destruction.  What gamer doesn't want to be an engine of destruction and get to have their own Stormbringer or Blackrazor?

Machinations of the Gods
Was Poul Anderson channeling some post-war geopolitics?  The gods, as superpowers, intervene in the mortal world only through proxies, and let their followers battle it out.  Neither side (the Asgardians or the Giants) wants to commit themselves to the mortal realm and bring about Ragnarok, so they arm the combatants and provide indirect help like the Cold War.  It’s a model that would work well for D&D.

Monotheism
Both of the fantasy novels I've read by Poul Anderson put Christianity directly in conflict with the magical world, but in both cases, the power of belief in Christianity trumps all other magic.  In The Broken Sword, the armed combatants fight in the mythic realm and mostly avoid the civilized world with its churches and parishes, lest they wake the sleeping giant, the religion of the "White Christ".

I remember a conversation with James Raggi where he mentioned using a monotheism that "shut off" pagan faiths as it became the primary belief system in an area; I get the sense the ideas would be game-able and create interesting conflicts between faiths.  I find these questions come up any time I consider settings that mix polytheism and monotheism and I'm trying to reconcile which belief system is 'true'.

Note:  I have yet to see a cleric that can turn undead in any pulp fantasy, but there are tons of priests that turn elves.  Funny stuff.

The Mythic Realm
Urban fantasy has co-opted the idea of the mythic realm that's all around us, we just can't see it; at some point I'd like to trace that idea back and see how deep that rabbit hole goes.

In The Broken Sword, the mythic realm overlaps the mortal realm; ordinary folks catch glimpses of trolls and elves during storms and foul weather, on certain nights of the year or during the largest of battles.  But mortals can be ensorcelled so they can see elves and trolls and creatures of magic all the time.

I don't recall any D&D settings taking this tact - making the world extremely mundane, but having a coterminous secret world where anything goes.  I do like the idea of making the mundane and magical world's adjacent - the magic world is across the river, or just past the old forest.  It's out there.

Too often I use maps rooted in real-world ideas of countries and borders, where each country has it's own little borderlands or sections of chaos.  How about a map where a large homogenous region is settled, mundane LAW, and everything past a certain point - across the river, perhaps - to the very edge of the world, is CHAOS?

I feel some West Marches style EGADD coming on...
Posted by John Arendt at 9:44 AM