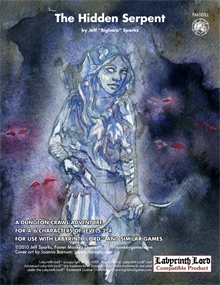 I've been holding off on reviewing The Hidden Serpent because it was planted in the sandbox, and until the recent ghoul apocalypse, there was a chance the players would swing by that way; I prefer to wait and do a play-test review where possible.

The Hidden Serpent was produced by Faster Monkey Games, levels 2-4 (the author is Jeff Sparks - "Bighara" over on Dragonsfoot.org - he's been a regular on the D&D board a long time). You can get the PDF for $6 over at RPGnow, less than going out to lunch. The module is a site-based adventure that involves exploring the dungeon fortress QUAZKYTON, home of Rogar and Zeglin.  If all those names seem familiar, it's because they're allusions to B1, In Search of the Unknown.

The module is 20 pages, excluding maps, and the physical dungeon is 2 levels, though each level isn't as large as its inspiration, Quasqueton from B1.  In B1, Quasqueton is an abandoned stronghold where some monsters have created lairs; in The Hidden Serpent, QUAZKYTON is an active stronghold with a garrison of soldiers and humanoids.  The high level leaders are out on missions, and this creates a window for the low-level characters to invade the stronghold and sack it.

Here's the good stuff.  First, it's a site-based adventure, low on plot hooks, and very easy to plant in a sandbox campaign.  I can't seem to get enough of these style adventures.  It has a fair amount of old-school whimsy and charm, with cauldrons, potions, and crystals that all create random effects.  The layout and maps are all nice.

I have some issues as well (but read on, since issues are usually opportunities in disguise).  Because it's presented as an active stronghold, and the two high-level bosses are "imminent to return", it doesn't create an atmosphere where the players can methodically explore, retreat when necessary, and return.  And there are only limited ways, as written, to actually learn the high-level bosses are on the way back.  Ostensibly this is just a plot-device to keep the pressure on the party.

I do think it creates opportunities for the DM to improvise and play the denizens of The Hidden Serpent intelligently; if the players invade and retreat, then have the garrison make a counter-attack, or set up traps and ambushes.  If the players miss the clue that the bosses are on the way home, improvise a different way to deliver the information - such as from a prisoner or bad-guy monologue.  I like the idea of the PCs sacking the stronghold, and making two high-powered enemies in the sandbox that will be coming after them later.

Adding a twist of horror
It wouldn't warm the cockles of my heart if there weren't ways to add some horror to The Hidden Serpent.  Luckily, Bighara obliged!  The back story of level 2 involves dwarven miners, betrayed and left to die, now risen as a wraith, wight and various zombies.  Undead by themselves aren't enough for true horror, but there's at least one way a character can get dropped alone into the lair of the undead - not only does this trigger a few types of horror from my list of horror techniques, it'll provide some vicarious horror to everyone else at the table trying to rescue the doomed guy before he gets eaten.

Here's another fun opportunity:  the wizard sealed the undead behind a special door… and what do lackeys do when the boss is away?  They open the things they're not supposed to open.  "You know why the bosses say never to open that door", says the ringleader.  "It's cuz what they got behind that door ain't monsters, it's where the wizard keeps his loot, I say.  Who's with me?"  It only takes one dumb-ass to open Pandora's box, and every garrison of mooks should have a couple of greedy dumb-asses.

Having the undead stalking the garrison while the players invade the stronghold would make me smile - turns it into a three-way.

Rating
This is a solid, workmanlike adventurer - it doesn't break new ground, but would make an excellent addition to any sandbox; I'd give The Hidden Serpent 3 stars out of 5 on the Beedometer.
Posted by John Arendt at 10:36 AM