Mythic monday - using elements of folklore, myth and legendry in your game.

'O,' answered Fergus, with a melancholy air, 'my fate is settled. Dead or captive I must be before tomorrow... Upon authority which never failed a person of my house. I have seen,' he said, lowering his voice, 'I have seen the Bodach Glas.'
--Sir Walter Scott, Waverly

﻿
The Bodak (in folklore, Bodach) is a Scottish ghost or spirit that foretells doom.  In Scott's tale, it's a spectral figure that appears on the moors whenever great disaster was impending, and always before approaching death.  In folklore, the Bodach (literally old churl) could slither down the chimney, creep along the floor, and torment children like a bogeyman.

I like Walter Scott's interpretation, that the Bodach is a harbinger of doom.  I'd argue "the Mothman" from The Mothman Prophecies legend was a Bodach, as were the bizarre shadow creatures in the horror movie The Eye.  (I may have a small thing for Jessica Alba, so I can be forgiven for seeing it).  In both cases, otherworldly shades are drawn to a location where a great tragedy is about to happen.

When Gary Gygax created an AD&D version of the Bodak in S4, the Lost Caverns of Tsocjanth, he did a funny thing - the Bodak no longer observes upcoming death as a witness, it literally sees death everywhere through it's own death gaze!

The 1E version of the Bodak is described as a monster from the Abyss, a mortal transformed into a demon spawn, and it shares immunities with demons.  By the time 3.x and 4E rolled around, the Bodak was made into an undead, fitting the folklore a little better.

Here is a version we can use in our classic D&D game:

The Bodak (for BX and Labyrinth Lord) 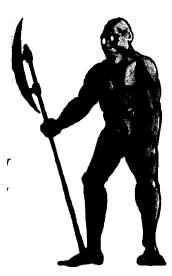 
Bodaks are shadowy, spectral undead drawn to locales where great amounts of death or tragedy will occur.  Their visage is tormented and hideous.  Mortals slain by a Bodak will return as a Bodak the following night.  Bodaks are vulnerable to sunlight, and take 1hp per round of exposure to direct sunlight.  The Bodak is turned as infernal/special.

Bodaks have the standard undead immunities, and can only be hit by +1 or better magic weapons.  The Bodak will typically carry a large pole arm (like a halberd).  However, the Bodak's fearsome attack is it's Death Gaze.  The gaze of a Bodak, when met, causes death unless a save vs Death Magic is made.  The range of this effect is 30'.

Using the Bodak in Your Game
Going back to the folklore, I like the idea of the Bodak as a harbinger of death and tragedy; the Bodaks, as servants of Death and the Wyrds, are able to read the skeins of fate, learn of upcoming tragedies, and follow them back to the tragic victims.  They're also known to stalk particular families through the generations.

As harbingers of doom, the monster shows itself to a victim on successive nights to torment them and foreshadow the upcoming doom.  The Bodak will stay at a range outside of the death gaze to prevent inadvertent killing.  If the victim somehow cheats their fate, the Bodak is well equipped to step in and correct the situation itself with it's Death Gaze!  (The Bodak always gets his man).

Under some circumstances, a locale that has seen a great amount of death will be claimed and guarded by a Bodak forever, such as a gruesome battlefield slaughter.
Posted by John Arendt at 8:31 AM