Does anyone know if stats were ever produced for the armies of Greyhawk for the War Machine rules?  War Machine was published in the Companion rules for classic D&D (BECMI) and again in the Rules Cyclopedia.  The War Machine rules are quite a bit more abstract and simpler than Battle System.

Here's the need - there's a zombie/ghoul army raging across Sterich, and I'm starting to create troop ratings for the remaining Counties.  I had started this campaign with the idea of building towards Against the Giants, so it makes sense to create statistics for the Giantish armies, as well as the defenders in Sterich, Geoff, Keoland and the Yeomanry.  The instability created by the plague of undead will give Chaos the opening it needs to strike!

Here is a snapshot of a typical War Machine write up from back in the day.  A big part of the War Machine ratings involved knowing the leaders and officers within the force; I'm not sure that level of detail was ever presented in Dragon magazine, so it'd need to be made up whole cloth.  I recently discovered Grendelwulf's place and there are write-ups of some armies, though I don't believe he covers the countries I need. 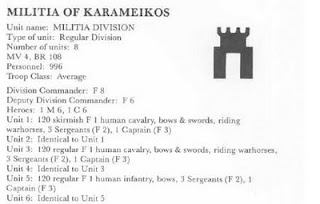 I'll do some more poking around the internet, otherwise I feel a new project coming on.  I'll be glad to post War Machine stats here.
Posted by John Arendt at 9:13 PM