I keep coming back to the idea of putting together a hex crawl for colonial New England - something in the mid-17th century, before the Salem witch trials, probably even before the Dutch lost New Amsterdam to the English - 1650 or earlier.

For our upcoming Cthulhu game in 1930's New York, I've been reading up on the history of the city, and it struck me how the early Dutch colonies of New Amsterdam had the frontier qualities of the American Wild West.  You have these European fur traders landing in the new world to make some money, heading up rivers and tributaries to trade with natives and trap animals, then returning to the settlements to get hammered and have a good time.  Basically the types of things you’d expect from adventurers.  Accounts of life in those Dutch colonies are quite a bit different from the theocratic colonies of Plymouth and Rhode Island.

Once you overlay the tropes of Lovecraftian horror, the idea of a fantasy game hex crawl in this type of setting becomes real interesting to me.  The native Algonquin and Iroquois nations struggle with degenerate neighbors that worship ancient horrors sleeping beneath the ground.  Alien terrors like the Mi-Go have been visiting earth for millennia, mining rare minerals and performing heinous biological experiments, such that remote ranges of hills are considered taboo for their evil reputations.  Beneath the ground, atavistic cave-dwellers emerge on moonless nights seeking flesh.

Many of the early colonists came to escape religious persecution; in a weird fantasy game, why wouldn't there also be witches, cultists, wizards, and sorcerers leaving Europe to avoid the inquisitor's pyre, either hiding in the settlements or striking out on their own?  American folklore has a tradition of "deals with the devil" - as the Black Man, or Old Scratch - happening out in the dark woods.   There's a theme of 'chaotic wilderness' versus 'law and civilization' that can be developed as well.

Part of why Lovecraft's body of work is so compelling is how he's created an intricate mythology for New England, blending science and cosmicism with supernatural horror in a self-referential body of work.  Stephen King carried the torch in a similar way with his Maine mythology.  I'm also enamored with Ramsey Campbell's treatment of the Severn Valley in England.  So I'd mine those sources for ideas on creating a sprawling hex crawl wilderness representing the eastern seaboard, littered with locations for these ancient horrors.

There could be opportunities for traditional dungeon crawls, too - cavern complexes and underground lairs of the atavistic cannibals, the lightless caverns carved by unknown hands implied by The Festival, the lost civilization of K'n-yan (from The Mound), or the subterranean dungeons carved by wizards to hide their experiments - like Joseph Curwen's dungeons from The Case of Charles Dexter Ward.

I admit, it' an unusual idea - I see a frontier of isolated colonies of competing nationalities, and then small border forts penetrating the interior of a dark and foreboding land, and then the discovery of monsters.  I usually carry around a brainstorming notebook for ideas, I'll keep it handy for jotting down notes for the colonial hex crawl and see if it generates a real spark.  Must be something about the zeitgeist, Chaoisum released a monograph called Colonial Terrors, there's an entire rpg called Colonial Gothic, and Sixtystone Press has a Colonial Lovecraft Country book penciled in for next year.  All of these works seem to be 18th century or so, around the time of the Revolutionary War, and they focus on traditional horror investigations, and not exploration and adventure.  Doing this type of thing as a D&D setting allows the use of technologies that explicitly support free-form wilderness exploration, like the D&D hex crawl and dungeon crawl.

With a cover like this, the LOTFP Grindhouse Edition looks tailor made for the colonial hex crawl: 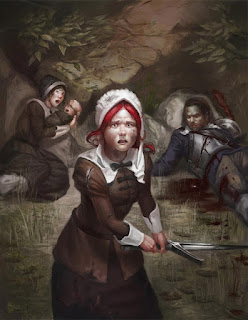