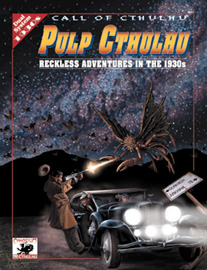 Pulp Cthulhu: Reckless Adventures in the 1930's jumps into the decade of pulp adventure! Enter a time when the world changes. Economic despair brings a nation low, while an eldritch shift in the fabric of reality unleashes dark horrors, and tempts heroes. Join in as secret societies and occult leagues battle against horrific creatures in a timeless struggle for existence.

Chaosium has been talking about Pulp Cthulhu for nearly 10 years - I remember hearing about it back when Cthulhu d20 was released, and I seem to recall an early version was even supposed to be a dual-stat product (BRP and d20).  That's a long time ago.

As I'm working through the background for our upcoming Trail of Cthulhu campaign, I realize the game is already going to be heavy on the pulp side of things - the characters will be a bit more stalwart than the nervous, sensitive types in Lovecraft's bleaker stories; the struggles will be a bit more real-world and physical than philosophical and dread-inspiring cosmic nihilism.

Note:  Ultimately I would like to run a campaign that features Lovecraft's bleaker themes, but I think it's something we'd either build up to, or run some one-shots in the Purist mode first - Trail has quite a few excellent Purist one-shots I'll be reviewing in the near future.  But a pulp campaign is a safe start for D&D gamers on their first foray into Cthulhu gaming.

I recently re-read Stunning Eldritch Tales, and it struck me how much two-fisted pulp action is already in some of the Trail of Cthulhu books - you've got sinister Nazi and Japanese agents, vicious Chinese triads and gangsters, jaunts to deserted islands, and weird science.  There's even a masked crime fighter like the Shadow, or the Green Hornet, in one of the investigations.

I'm working through the Dramatis Personae for the campaign, and we've  got plans to make player characters in a couple of weeks.

I've been thinking about pulling out my Mignola Lobster Johnson stories for some extra inspiration.  So here's the question for the readers - what's your favorite bit of pulp inspiration?  It could be a film, a comic, or even a gaming supplement or book.  Thanks!

Email ThisBlogThis!Share to TwitterShare to FacebookShare to Pinterest
Labels: Blogthulhu