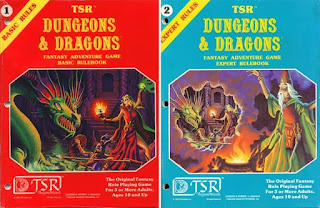 I saw more rumors and announcements this week of WOTC reprints.  The AD&D 1st Edition books are being reprinted, there's a new version of the boardgame Dungeon!, and rumors that a reprint of 3.5 might be coming this fall.  Where's the love for the classic Basic and Expert books, WOTC?

Arguably the widest played retro-clone is Labyrinth Lord, a game that tracks very closely to those original BX red and blue books.  The well-regarded retro clones, LOTFP Weird Fantasy Roleplaying, and Adventurer Conquer King are essentially refined interpretations of the BX rules set (or the BECMI edit, if you're feeling pedantic).

I would love to see either the BX books or the BECMI books collected into a hardcover for reprinting.  Maybe even the D&D Rules Cyclopedia, although to be fair, I didn't like TSR's layout and art styles in the early 90's as much as the older styles.  We need that Erol Otus interior art and covers.

I've seen posts through the years that the classic D&D boxes were far and away the best selling versions of D&D because they were in mass market, box stores, and translated into various international languages.  (Frank Mentzer has frequently pointed that out on the boards).

The argument for reprinting them:  they're the best selling versions of D&D of all time, they're already optimized for introducing new gamers and kids (ie, building the hobby), and they're the darlings of the OSR retro clone movement.  What's the hold up, WOTC?

Seems like a good time for a new poll - posted to the right.  Which edition of D&D would you like to see reprinted?  Maybe this is the beginning of a period of "reprint madness" and we'll even see hard-to-find modules and supplements put into large collections or omnibuses.  One can hope.
Posted by John Arendt at 9:34 AM