The Spreaders - a Menace for the Colonial Hexcrawl


I've had a busy couple of weeks at work, so blogging is taking a bit of a back seat.  However, we got the Trail of Cthulhu game started last weekend (a report is forthcoming); I've managed to get in some reading for the Colonial Hex Crawl idea; I'm still plugging away on the Black City, currently mapping and detailing The Black City's Tower of Pain.  All fun stuff.

This creature, the Spreaders, gives me great hope in the potential of the Colonial Hex Crawl.  They're dismissed as a rumor, a child's tale to scare hunters and trappers into avoiding pristine campgrounds while plying the waterways in the rich forests of western New York.  There are stretches of river and shorelines that have an evil reputation, and woe to the foreigner who ignores the warnings of a native guide or dismisses Indian tales out of hand.

The Spreaders are small faeries that emerge from their subterranean burrows at night to drag off unwary trespassers.  In concert, a number of these diminutive sprites can cast a powerful sleep spell, ensuring that no sentry or guards disturbs them as they trundle off a victim into the night.  When the victim finally awakens from their enchanted sleep, they'll discover they've been spread eagled on the ground, their arms and legs firmly bound with vines.  Sticks are wedged to keep each finger splayed, the legs spread apart, eyes propped open with twigs, and mouth wedged apart with wood.  It's quite likely a search party would walk right past a victim, covered in dirt and leaves (but for the eyes), or hidden in a bramble, unable to make a sound or move.

Victims that stumble into the spreader's domain usually do so at the end of a long day of river travel, making camp at a tempting spot just as dusk settles over the river.  Had they performed a more detailed search before dark, they might have discovered a nearby hollow filled with the cast off belongings of previous victims; the rotting remains of canoes and boats stretching back years and decades molder into rot where the Spreaders carried and hid them.  Here and there in the nearby woods are skulls and bones of past victims that unwisely camped near these dark faeries.  And below ground, deep in their diminutive tunnels and warrens, the Spreaders wait for the next evening. 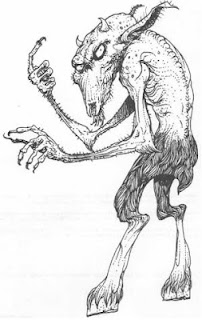 Every 5 Spreaders acting together can cast a sleep spell once per day that induces a deep, magical slumber.  10 Spreaders can carry a sleeping victim off into the nearby forest and "spread" them in a secluded spot to die alone.  Abandoned victims lose a point of temporary wisdom per hour due to horror (minimum score 3) and die in 2-3 days from exposure and thirst.

The spreaders don't collect treasure, but the nearby woods usually have a spot where the belongings and canoes of previous victims are dragged and hidden, so there might be incidental treasure in the canoe graveyard.

*The art is from the Fiend Folio (the Forlarren, by Russ Nicholson). The spreaders are from an Abenaki ghost story retold in When the Chenoo Howls, a collection of eastern Native American monster tales.  For children.