A Review of Stunning Eldritch Tales 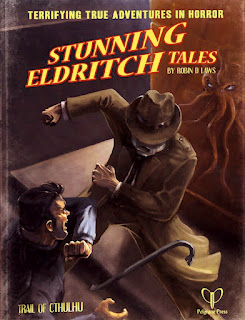 Stunning Eldritch Tales is a Robin D Laws book, 82 pages, and covers four scenarios featuring different themes in the pulp style of adventure.  Here's the blurb on each from the Pelgrane site:

Devourers In the Mist
A rugged adventure tale in which the survival of island castaways is tested not only by the elements — but by the twisted shapes of half-seen, sadistic entities who haunt the atoll’s jungled interior!

Shanghai Bullets
Guns-blazing danger portends and international intrigue unfurls in the city of conspiracy, the licentious, opium-infused Berlin of the East. In the shadow struggle between nations, no weapon is more fiercely coveted than the star mirror. It brings blood-draining death from beyond the stars!

Death Laughs Last
When philanthropist and gadabout Addison Bright is found bizarrely murdered in his own New York mansion, only a team of doughty investigators can protect his reputation—and the sanity of mankind—from the awful truths lurking in his tragically colorful past.

Dimension Y
A scientific experiment yields the promise of a glimpse into an adjoining reality, a repository of man’s dreams and memories. But when the heroes peer through this window… they find cosmic horror peering back at them!

We played "Devourers in the Mist" as a one-shot a few years ago, and it works really well in that capacity - it's short, self-contained, comes with pre-generated characters, and super deadly.  I'd dare say it would be difficult to fit into an ongoing campaign without stretching credulity.  It has a strong theme of man-against-nature, with hideous monsters.

"Shanghai Bullets" introduces an element of underworld treachery, smoky nightclubs, and frequent betrayals and reversals.  "Death Laughs Last" involves big city criminals and a masked vigilante in the style of the 30's pulp action heroes.  "Dimension Y" is weird science run amok.  While "Dimension Y" is creepy and stressful, the Mythos is very much a secondary element to "Shanghai Bullets" and "Death Laughs Last" - these are pulp adventurers first and foremost, with a side serving of horror.

As Gumshoe adventures, the collection does an excellent job of presenting the strengths of the system, blending core clues, investigation, and resource pool spends to navigate complex plots with lots of non-player characters.  Using "investigative spends" is one of the more free form areas in the rules, so it's valuable seeing how the designer suggested them in his own published scenarios.

I previously bypassed running the other pieces in Stunning Eldritch Tales because they were so action-oriented compared to my regular tastes; my usual approach to Cthulhu gaming has been with "accidental investigators" like professors or antiquarians or unlucky journalists stumbling unwittingly into the world of horror investigation.  But the new campaign is going to feature a lot more "badges and guns" action, and I'm finding the tone of this collection is perfect for inclusion.

What goes around comes around.  I wouldn't have recommended this book when it came out a few years ago (not bleak enough, I guess...) but I appreciate that Cthulhu gaming is diverse and supports different styles like "pulp" or "purist".  Now I find it's an absolute perfect fit for the new campaign since I'm running something on the pulp side of things.  I'm glad to see there are plenty of scenarios out there to support the style - a few of these stories are going right into our queue.  The investigations in Stunning Eldritch Tales are intricate, sophisticated, full of action, and effectively capture the pulp vibe implied by the title - I recommend the collection to fans of crime novels and 1930's action serials - or if you just want to put more bullets and fists into your Cthulhu gaming.