A Review of the Black Drop 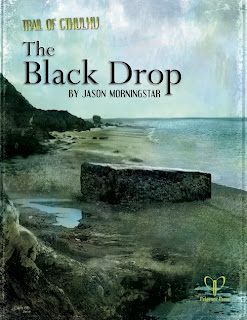 Shortly after reading The Black Drop, I knew it was one of the first Trail of Cthulhu adventures we had to play.  It has the right blend of exotic locale, real world history, weird horror, and moral difficulty to generate a memorable horror game.  Plus - for the D&D and fantasy gamers out there - the ideas behind this one make for a great inspiration in your fantasy or weird horror game, if you don't mind filing off the serial numbers.

The adventure involves the Kerguelen islands, a small cluster of islands in the far south of the Indian Ocean just outside of the Antarctic circle.  A steamer (with the characters on board) is headed to the islands to retrieve a failing French colony of shepherds, while across the islands are littered encampments from the age of whaling.  Unbeknownst to the players at the start of the adventure, a sinister group of Nazi scientists are on their way to the islands as well.

The Kerguelens are the topmost remains of the sunken Kerguelen plateau, which was home to the ancient Lemurian empire; as the players explore the island, they even encounter Lemurian artifacts.  The adventure revolves around the stirring of an ancient god, a 30 year astronomical cycle, ambiguity whether the colonists or the scientists can be trusted, and some difficult moral choices that force horrible decisions on the players.

The scenario is fairly open ended, and the players have a lot of choice around where they want to go and how they want to explore the island.  Time is a factor, as there's an impending astronomical event that drives some of the action, and antagonist reactions also drive some events, but otherwise this is a freer structure than many investigations.  It also offers a lot of interesting role playing situations for the keeper.

Some groups don't like body horror, or psychological horror, or having to do bad things, and this adventure confronts the investigators with decisions concerning the latter, so there's some fair warning.  My own group is not comprised of horror enthusiasts, and they thoroughly enjoyed the scenario, although the body count was quite high.  I'd recommend using the pre-generated characters and running this one as a one-shot, rather than integrating it into a campaign.

I highly recommend the scenario, it's one of the strongest in the Trail of Cthulhu line, and the investigation ends up feeling quite epic and action oriented for such a short jaunt.  I've often called it the "lite" version of Beyond the Mountains of Madness.  It's written by Jason Morningstar, an RPG designer in his own right (Fiasco), and the PDF format makes it a great way to test drive Trail of Cthulhu - the adventure is 40 pages, with 6 pre-generated characters, maps and handouts, and should cover two nights of gaming (6-8 hours).
Posted by John Arendt at 4:00 AM