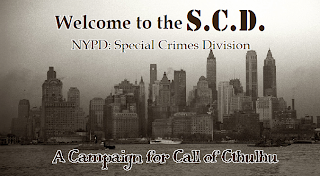 We started our episodic Trail of Cthulhu game last weekend, called "Welcome to the SCD".  One of the regulars had to miss, we also had a new guy, so here was the crew:

Here’s as good a blurb for the adventure kick-off as any:

"We've got a report of a patrol officer being lifted into the air and ripped to pieces by an invisible monster in downtown, in broad daylight.  Snyder, why don't you take someone over to the morgue and check it out.  They've got a witness down at the precinct giving a statement - the gas station attendant.  Make sure you test him for booze.  If he checks out, it sounds like we might have a case."

The SCD - Special Crimes Division - is a sub-department in the NYPD that investigates crimes that are either weird, sensational, or involve the occult; the scant number of detectives consigned to the SCD are expected to work anonymously and keep the weird stuff out of the newspaper.  As such, they get to bring in a lot of contractors, and Snyder likes to work with the priest and O'Grady, and the occult expert, Trevor.  That's how the players justified the make-up of their group.

I'm not sure how I want to approach game recaps for Cthulhu… investigative games require research, facts, interviews, etc, and usually revolve around a big reveal, that moment when the players connect the dots.  It seems like a lot of work to do it in detail, and a recap still wouldn't do justice to the table top experience.  I think I'll try to quickly move through the facts each week, and just focus on one or two key scenes.

Snyder gathered his team, and the group performed the following actions:  interviewed the gas station attendant, visited the morgue, the gas station, performed some lab work on an unidentifiable botanical substance, visited the Columbia U library, spoke with dispatch, and ultimately found themselves driving out to the Jerome Park neighborhood in the North Bronx, armed with the following facts:  the dead cop, Weidner, was torn to bits in broad daylight and exsanguinated by an unknown assailant.  He had an unidentifiable plant-based hallucinogen in his system.  His last call was a neighborhood check in the Bronx to calm down a worried teenager.  Apparently, she thought she saw a dead arm flop out of a package being hauled into the house by the neighbor across the street, and called the police.

When Snyder pulled off of Grand Avenue into the neighborhood, a pair of gangster started up their sedan and drove off - O'Grady identified  one of them as Hammerfist Dempsey, an enforcer who works for a small time loan shark in Harlem, Fat Lips Louie.  Snyder let them drive off, and the group interviewed the mom, son, and babysitter that lived across the street from the suspicious Mister Corbitt.  Regarding the gangsters, O'Grady figured he could get in to see Fat Lips sometime later anyway, but they did wonder why a loan shark would be after Corbitt.

Barring the babysitter's tale, Corbitt had a sterling reputation in the neighborhood.  When they learned that Corbitt ran an import business, and often brought in rare orchids and tropical plants for his extensive green house, they saw a connection with the hallucinogen found in the dead cop, and decided to visit Corbitt's place.  Corbitt wasn't home.

Corbitt had spectacular flower beds and gardens, and his reputation as a green thumb was well-earned; the greenhouse door was open.  Trevor stayed back to peer into the house, and thought he saw something through a window - an odd glimpse of a leg or foot leaving a room backwards.

O'Grady went around to the other side and peered in another window - and shouted in fright.  Staring back at him through the window was a disembodied woman's head; attached to the sides of the head, where the ears should be, where a pair of hairy man arms, holding up the head like legs.  Sticking out the back of the head was a backwards woman's leg, with the knee sticking up and the foot facing back.  The head swayed back and forth, screeching at him through the glass, balancing on the tripod of arms and a leg, until it launched itself back into the house hopping like a freakish toad or startled cat.

O'Grady convinced Snyder there was a creepy thing in the house, they jimmied the lock to the back door, and Snyder entered, with his revolver drawn.  The head-thing scampered into the kitchen, and Snyder blasted it in the skull, "killing" it.  Green ichor dripped down the wall behind the twitching collection of ill-matched parts.

Snyder had O'Grady roll up the remains of the scampering thing in Corbitt's table cloth, so they could throw it in the trunk.  "Evidence".  Snyder thought he heard a noise in the basement, and after reflecting on the hopping woman's head, decided he didn't want to know what Corbitt might have in his basement, at least not yet.  They threw the head in the trunk and waited at the car to see if Corbitt came home that night so he could be brought in for questioning.

Corbitt returned home shortly after dark, and the cops were waiting for him.  He went quietly to the station with Snyder and Father Vinnie, and seemed genuinely surprised to hear there was mischief in the neighborhood and he was a suspect.  Either that, or he was a sociopathic liar and fooled them with his kindly old gardener act.  Corbitt was taken down town without incident, and left in a holding cell at the station after some cursory questioning.  Snyder went back out to the house where Trevor and O'Grady were left watching the place.

They sat in the darkened yard, watching the creepy house without any lights on, and kept wondering if maybe they should check out the greenhouse, or poke around the house.  Finally O'Grady had a flash of insight, and decided to break into Corbitt's trunk.  There was a pair of galoshes, heavy rubber gloves and a dripping burlap roll… inside the burlap were body parts, a human heart, a liver, and the severed leg of a child.  It was wrapped in disposal plastic from one of the city's poorer hospitals, Polyclinic over on the west side.

We stopped there, after Snyder and Vinnie got back out to the house.  They decided it wouldn't be a horror game if they didn't venture into the creepy house and greenhouse in the dead of night (bravo, fellows), and decided they could leave Corbitt overnight in the station as a "person of interest".  (No Miranda rights in the 1930's.)

The group is thinking that Corbitt cut a deal with the mobsters to get access to body parts for his gruesome experiments, and that's why a loan shark is after him.  They learned from the neighbor that he lost his wife and unborn child years ago during her pregnancy, so they're expecting to see a surgical laboratory in the basement where Corbitt is working on building a new wife, Herbert West style.  Tune in next week.
Posted by John Arendt at 8:20 AM