Review of Book of War 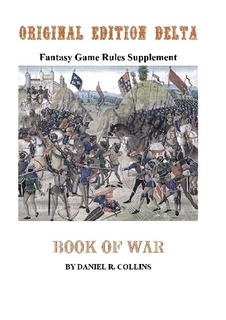 Last week, we spent about half our regular game session running a play test mass combat using the Book of War rules - here is the actual review.

Book of War is a short pamphlet (24 pages) that provides simple, easy to use rules for war game style miniatures combat with D&D troops, mercenaries, and monsters.  It's published by fellow blogger Daniel J Collins (Delta of Delta's D&D Hotspot).  In the foreword and design notes, Delta calls out three goals - to faithfully abstract the math and probabilities behind D&D combat, to create a war game that could be used during D&D or stand on its own as a side game, and to strive for a degree of Medieval realism.

The core rules are really simple to pick up - units attack with a d6 and a simplified armor value, and the rules around movement, formations, and the turn sequence cover about 5 pages.  The scale is 10 to 1.  Advanced rules in the same booklet cover things like units with special abilities and monster units, along with heroes and wizards.

Besides using Book of War to model military units in a D&D game, the book is set up for use as a stand alone game. Costs of units are balanced so that players could each build a force for the same points total, randomly generate terrain and weather, and play a table top game of movement and combat in lieu of a regular D&D session.  The author's blog features quite a few recaps of table top battles using various point builds.

One area where Book of War varies from attempts in other D&D mass combat systems is it diminishes the effect of leveled characters on the battle, unless the character is well above name level.  The concept is that when using the large numbers and averages calculated into Book of War's simplified dice, mid-level characters don't sway the outcome; it's how the math works.  For a party of player characters against special groups of monsters, the most satisfying approach for the players would be to have a hero versus monster side-battle using the standard D&D rules, rather than reduce their survival to a single d6 roll while embedded in a unit of troops.

The players really enjoyed this approach to mass combat.  The rules are simple enough that our 10 year old players could pick them up during the game, and start making their own moves (with nudging from one of the dads).  We've used the abstract combat of War Machine in our campaigns in the past, and this was greatly preferred - the players enjoyed be able to do table top maneuvering, and use terrain and tactics.  War Machine is basically "build a force, show up, make a single dice roll" to determine the results of a battle.  That being said, they recommended using War Machine for off-screen battles involving NPC kingdoms, and to use Book of War for player-facing combats.  One of the players does a lot of 40k Miniatures, and felt it was familiar, but simplified for fast play - thumbs up.

I'd recommend checking out Delta's blog; there were quite a few design notes last year that analyzed the math, and new units are added from time to time, expanding the selection of choices.  For instance, Delta recently covered lesser undead to provide stats for units of skeletons and zombies.  The book is available at Lulu in pdf version or print.